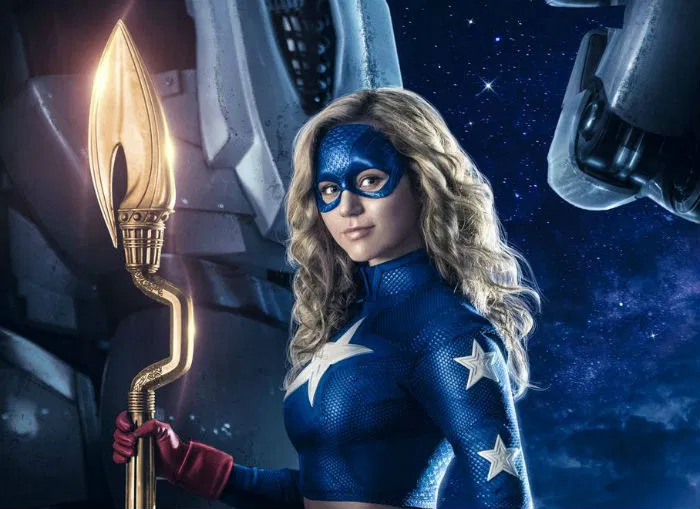 For decades comic books and television shows have dealt with issues facing their fans. Wonder Woman fought the Axis Powers in World War II when people feared the war. Supergirl’s underlying theme was racism and learning to be comfortable with yourself. If you’re wondering who Geoff Johns created with Stargirl, we’ve got the information you’re looking for.

Stargirl is typical of a 15-year-old girl dealing with the problems of her age and time. Her story begins with her struggles with a new stepfather. With the current rate of divorce, Stargirl starts out like many stepchildren. She views her new stepfather as an intrusion in her life with her mother. It is obvious she dreams of a father that left one day and didn’t come back.

In the midst of this emotional turmoil, she is forced to move to another town. All of this contributes to her resentment of her stepfather, Pat Dugan. Blended families everywhere can relate to this.

High school, when you know people, is brutal. When you are the new kid, high school is even worse. Stargirl is dropped into a new school where she is an outsider, and as in real life, she’s treated like one.

On her first day, she is friendless and alone, but she is strong enough to stand up for another student who is being bullied. Like Wonder Woman before her, she demonstrates that it is possible to be strong in the face of adversity.

She also deals with another common issue in high schools today. One of the students is subjected to shaming. Body shaming and slut-shaming are both very real and intense issues. By helping her friend deal with slut-shaming, Stargirl teaches young women how to handle these situations.

Fortunately, she finds the Cosmic Staff, which gives her the confidence to seek revenge on the bully. While puncturing his tires, she winds up destroying his car with the staff. Her adventures with the staff allow her to bond with her stepfather over his involvement with the Justice Society.

When Stargirl has her first encounter with the villain, Brainwave, she loses some of her newfound confidence because he brings up feelings of abandonment and isolation. Despite this, she fights for what she believes in and demonstrates to her young fans the importance of strength in the face of adversity.

Stargirl is both stubborn and reckless. She is young and new to the power the Cosmic Staff gives her. This makes her feel invincible. Like many people her age, she doesn’t always fully understand the consequences of her behavior. Ignoring warnings from her stepfather, she continues to act impulsively. Unfortunately, her stubborn and rash behavior get her injured and a fellow student is killed.

Realizing at last both the danger to her friends and family and the fact that her father is not Starman sends her spiraling almost out of control. She puts the staff away, essentially giving up because she doesn’t believe she is the right person to be Stargirl. She only picks up the staff again when her family is threatened.

Like all superheroes, Stargirl faces the problems of her generation. That not only makes her stronger but makes her more relatable to a new group of fans. Her spirit and flaws give her character the same depth that heroes like Wonder Woman and Supergirl exhibited in their time.

Summer Activities To Entertain Your Kids

5 Tips for Being a Team Parent

Tips For Supporting Your Child With Braces